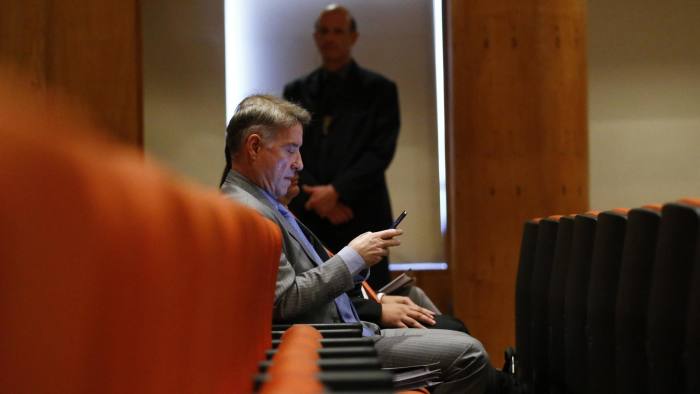 Wedged between two of his lawyers in a Rio de Janeiro courtroom, Eike Batista intently checked his mobile phone for WhatsApp messages as he waited for his criminal trial to begin.

As captured by photographers who cautiously circled the former billionaire in the wood-panelled room, one message was from “Flavia beautiful troublemaker”, wishing him luck. “I wish I was by your side, but my heart is”, read the message, understood to be from his girlfriend and mother of his latest child Balder – named after a Nordic god like the rest of his offspring.

Social media messages have brought Mr Batista, 58, anything but luck – they are one of the reasons Brazil’s former richest man could be the first person to go to jail for insider trading in the country’s history.

Among other accusations, public prosecutors allege Mr Batista used Twitter last year to manipulate the share price of his oil company OGX by encouraging his followers to invest in the company, just as he was secretly selling his own shares. OGX filed for bankruptcy five months later, prompting the collapse of his oil and mining empire and wiping more than $30bn off the stock market.

While the judge leading the trial, Flávio Roberto de Souza, said he would likely only reach a verdict between January and March next year, the case is proving to be a landmark for Latin America’s biggest economy.

“[Mr Batista] is an emblematic figure, he was always the poster boy of his own companies and he had the megalomaniacal dream of becoming the richest man in the world,” said Judge Souza after the first session ended on Tuesday afternoon.

“To see someone like this sitting on the bench is really a historic moment for the justice system,” he said.

If found guilty on all six counts, Mr Batista would be sent to jail for at least six years. That would qualify as a “closed regime” sentence, meaning that Mr Batista would not be allowed to leave prison during the day to work for example, said Judge Souza.

Brazil’s growing middle class has put ever more pressure on the authorities to bring corrupt politicians and businesses to justice. Only last week, police detained some of the most powerful men in Brazil’s construction industry, accusing them of taking part in a vast corruption scheme at oil company Petrobras.

“The country is asking for a change to the credibility of the powers that be,” said Judge Souza.

However, Mr Batista’s lawyers say the evidence against their client is “inconsistent”.

In a scene that resembled one of Brazil’s soap operas, three witnesses appeared in front of the judge and camera crews in the courtroom on Tuesday: a CVM market regulator representative, minority shareholder Aurélio Valporto and an ex-OGX employee.

Mr Batista’s lawyers focused their attacks on Mr Valporto, saying he could not be an independent witness as he had lost money from OGX. The prosecutor shouted back: “What if he were a victim of rape, he couldn’t be a witness just because he is also a victim?”, forcing the judge to intervene.

Both sides also warred over a platform that OGX kept in Asia, allegedly because Mr Batista already knew early last year that the company’s oil wells were duds.

For Judge Souza, though, it is the piles of paper on his desk that will ultimately reveal the truth, suggesting he may already have a likely verdict in mind.